Fatty Acid (Fatty Acid) is a general term for the Fatty acids formed by the hydrolysis of natural oils and fats with water. At present, there are more than 200 kinds of natural fatty acids, which are widely found in animal and vegetable oils.

Fatty acids play a very important role in the process of life. They are the basic substances that make up human body fat and lipids, and are important component of cell membrane phospholipids. It can also regulate the composition of cell membrane and the proteins and receptors in the membrane directly. With the development of fat nutrition research, people pay more and more attention to the nutritional function, biological function and the relationship with disease and health of fatty acids.

Applications of Metabolomics in Medicine

Chronic pancreatitis (CP) arises with an incidence of between 4 and 23/100 000 in different populations and represents a risk factor for pancreatic cancer and a frequent differential diagnosis. Common diagnostic methods for these two diseases include B-ultrasound, CT, and tumor marker determination. CA19-9 is a marker for pancreatic cancer, but CA19-9 may also be elevated in patients with non-malignant disease. At present, many patients with pancreatic cancer are found in the final stage, and 80%–85% of patients are being diagnosed in unresectable stages. Diagnosis is further hampered in the presence of CP, but earlier detection would increase survival by 30%–40%. Thus, there is a clear medical need for the early detection of pancreatic cancer in patients with CP. Current non-invasive diagnostic tests can distinguish between pancreatic cancer (pancreatic ductal adenocarcinoma (PDAC)) and chronic pancreatitis (CP) in only about two thirds of patients. This paper aims to find blood-derived metabolic biomarkers with optimized negative predictive value.

Variance analysis of training set data: 29 different metabolites were detected in common between PDAC and CP in serum and plasma (as shown in figure). To construct an effective diagnostic model for pancreatic cancer, nine plasma metabolites (except CA19-9) were screened by elastic network algorithm.

Research on TCM prescriptions and syndrome

According to the research idea of "biomarker-prescription effect evaluation-in vivo pharmacodynamic material basis", the concept of TCM prescription syndrome metabolomics (Chinmedomics) has been proposed, it is also an integrated strategy to study the effectiveness of traditional Chinese medicine prescriptions and the material basis of their efficacy in recent years.

4,5caffeoylquinic Acid and Scutellarin, Identified by Integrated Metabolomics and Proteomics Approach as the Active Ingredients of Dengzhan Shengmai, Act Against Chronic Cerebral Hypoperfusion by Regulating Glutamatergic and GABAergic Synapses

Dengzhan Shengmai (DZSM) is a proprietary Chinese medicine for remarkable curative effect as a treatment of cerebrovascular diseases, such as chronic cerebral hypoperfusion (CCH) and dementia based on evidence-based medicine, which have been widely used in the recovery period of ischemic cerebrovascular diseases. The purpose of this study was to investigate the active substances and mechanism of DZSM against CCH.

Integrative metabolomic and proteomic studies were performed to investigate the neuroprotective effect of DZSM based on CCH model rats. The exposed components of DZSM in target brain tissue were analysed by a high-sensitivity HPLC-MS/MS method, and the exposed components were tested on a glutamate-induced neuronal excitatory damage cell model for the verification of active ingredients and mechanism of DZSM.

Upon proteomic and metabolomic analysis, we observed a significant response in DZSM therapy from the interconnected neurotransmitter transport pathways including glutamatergic and GABAergic synapses. Additionally, DZSM had a significant regulatory effect on glutamate and GABA-related proteins including vGluT1 and vIAAT, suggested that DZSM could be involved in the vesicle transport of excitatory and inhibitory neurotransmitters in the pre-synaptic membrane. DZSM could also regulated the metabolism of arachidonic acid (AA), phospholipids, lysophospholipids and the expression of phospholipase A2 in post-synaptic membrane. The results of glutamate-induced neuronal excitatory injury cell model experiment for verification of active ingredients and mechanism of DZSM showed that there are five active ingredients, and among them, 4,5 caffeoylquinic acid (4,5-CQA) and scutellarin (SG) could simultaneously affect the GABAergic and glutamatergic synaptic metabolism as well as the related receptors, the NR2b subunit of NMDA and the α1 subunit of GABAA. 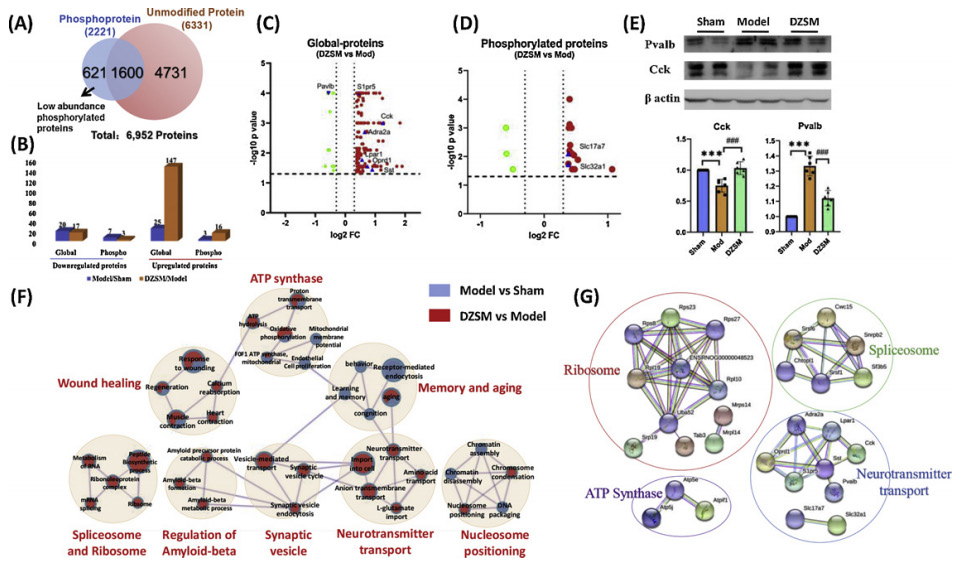 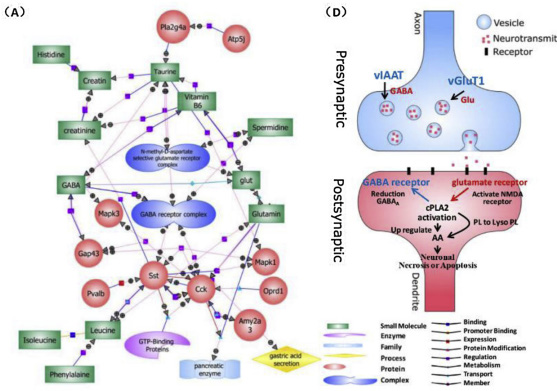